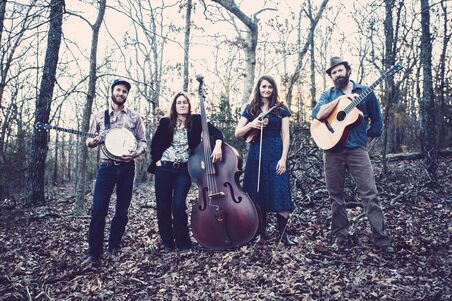 Sad Daddy poses for a quick photo in the Ozarks
Sad Daddy, forming in the Spring of 2010, has traveled down many a road, together and separate.  The four members, Brian Martin, Joe Sundell, Rebecca Patek and Melissa Carper all conspired and united in the sudden spare time of 2020, to create their 3rd album, ‘Way Up in the Hills.”

They all met up at Brian’s cabin in Greers Ferry, Arkansas, and over a couple bottles of chocolate milk and a few jugs of whiskey they collaborated, writing and arranging songs specifically for the new album.  A first for Sad Daddy, they took the brand-new bones of each other’s ideas and worked on them as a band to construct and finish the songs.  They had all decided on a down home, back to the country theme for the album—a kind of reflection on what was going on and the desire to go back to simple ways, self-sufficiency, goin’ way up in the hills and letting this shit figure itself out.

The following weekend the four met again at the cabin to record with engineer, Jordan Trotter.  Trotter brought his equipment into the cabin and they recorded, live and in a circle, the 14 original tunes—half of them only a week old and the other half what had grown to be Sad Daddy standards since their last album.
The feeling of being at a ‘home’ studio and at a beautiful Arkansas lake and woods setting transfers to the album.  A genuine relaxed and good time vibe purveys the recordings, and Sad Daddy took the time to get innovative with different sounds they were going for such as recording stomps on the cabin’s porch and trying out hamboning, scatting, insect noises, mouth digeridoo, paddy cakes, double clawhammer banjo, bacon sizzling, etc.  Tunes Arkansas Bound, Charlie Pickle, Cold Rain and Poor Man’s Son all got the stomp treatment to varying degrees, reinforcing the down home pickin’ on the porch feel. The hamboning also keeps making appearances, as if this album is about just using what we have handy for percussion. Also a first, a couple of acapella tunes made it on the record featuring the four-some’s strong vocals and harmony singing. 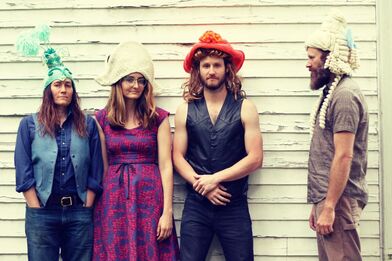 Sad Daddy has some fun with hats crocheted by Gina Gallina
Unique to Sad Daddy, all of its members sing lead and write original tunes, and the combined sound is truly a mix of American Roots music.  From the sounds of early blues, jazz and jug bands to early country, folk, old-time, bluegrass, to soul and funk, they combine many influences, similar and different, creating an indefinable genre of their own they like to call Sad Daddy.  Joe Sundell, on banjo and harmonica, developed his unique banjo picking style from studying Mississippi John Hurt’s finger picking.  On the tunes that are more jug-band style, Joe brings his unmistakable ‘Joe bounce’ ragtime jazz feel.  His distinctive voice, deep yet trebley like a combo of Willie and Hank, and folksy writing and delivery reminiscent of Woody Guthrie, meshes perfectly with the stylings of the other three.  Brain Martin on guitar, kazoo, mouth horns, and harmonica also emulates Mississippi John Hurt’s style picking on guitar and seems to be in a league of his own with his masterful kazoo and mouth horn solos.  Brian’s deep, gravelly vocal tone is reminiscent of a Leon Redbone or Tom Waits and his writing of Willis Alan Ramsey and John Prine.  Melissa Carper, bringing the booming upright bass, makes sure the whole room is on the right groove.  Also pulling from early country, blues and jazz (such as Jimmie Rodgers, Leadbelly, Billy Holiday) Carper has been called by Saving Country Music ‘one of this generation’s greatest singers and songwriters.’ Her voice has been likened to a ‘Hill-Billy Holiday’ by her peers, with a muted horn like tone that melds with and soars above the tones of Joe and Brian’s voices.  Rebecca Patek gets rowdy on fiddle, sliding between all the styles with her effortless delivery and down home and funky rhythms.  Her distinctive voice, somewhat like an old-timey Iris Dement, and her lazy vocal phrasing are a delight for the ear to follow around.  Her songwriting style combines roots with, at times, more modern grooves adding yet another unique piece to the Sad Daddy pie. 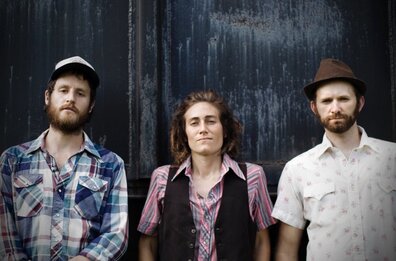 The original Sad Daddy trio
Going back in time, the first seedlings of Sad Daddy were planted when Martin and Carper met in Arkansas at each other's shows and talked about joining up to play together some day.  This would come to fruition in 2010 as they brainstormed playing shows together during the summer months.  He mentioned it would be fun to have a 3rd person on this project and Carper had recently starting busking down in Austin, TX with Sundell (native Arkansan) and suggested Joe as the 3rd person.  The 3 immediately shared tunes via the interweb (Martin in AR and Carper and Sundell in TX) and began preparation for a summer of touring together in 2010.  They decided to make a quick recording of each other's tunes to sell on the summer tour.  This self-titled debut album of 10 original songs was soon to become a fast favorite of all who would hear it, including many of Sad Daddy's stone-cold hits to this day.  Martin had been entertaining the idea of naming a band 'Sad Daddy', an expression he had picked up from a friend in Southern Arkansas who would call a big fish, or a big snake, or a big buck a 'Sad Daddy'-- so Sad Daddy it was.  The three had a successful first summer of touring in Arkansas, Louisiana, and Texas and began gaining a following in these states.  Sundell and Carper returned to Texas after this summer of fun in which they had pitched tent mostly in Arkansas.  They continued to meet up in each other's states for shows.  A year or so later, Patek began sitting in on the Texas Sad Daddy shows and soon the trio couldn't live without the amazing addition of her fiddling and singing to the group. 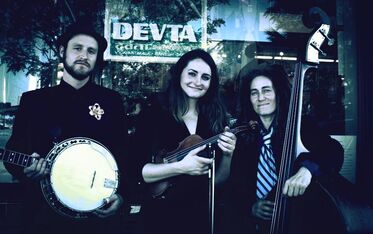 The Show and Tellers
Sad Daddy has had various phases of hitting it hard as a band and times of focusing in on solo projects and other bands, always reuniting and fanning the Sad Daddy flame anew, jumping right back into it like seeing a good old friend again.  All with solo albums, Brian Martin (No Rider), Joe Sundell (Ramblin' Mind, Hat Thief, Incredible Fun Box), Rebecca Patek (Come up and Meet Me), Melissa Carper (Arkansas Bound, Daddy's Country Gold), when the 4 come together they offer their original material up to arrange 'Sad Daddy style.'

Sad Daddy has formed bands within the band, largely due to the distance of residing in different towns and states.  Joe, Melissa and Rebecca formed 'The Show and Tellers' while living in Austin.  When Joe moved back to Arkansas in 2014, Rebecca and Melissa formed their duo, 'The Buffalo Gals Band' and their duo albums 'Brand New Old-Time Songs' and 'Where the Heart Wants to Go' both reached Number 2 on European Americana charts and charted on the Roots Music Report in the U.S.  Brian Martin has had a long and steady career with his One-man band, Brian Martin, touring extensively across Arkansas and Louisiana.  Joe also performed for many years as a One-man band and in 2014 opened for Shakey Graves on a tour across the Eastern U.S.  Other bands of note have been Sundell's Austin-based String band 'The Austin Steamers' with songs from their 'Old Black Crow' album featured in the Oscar-winning movie Boyhood.  The band also cameo-ed in the movie and there is a close-up shot of Sundell's hand and banjo-head for a half of a second!  Melissa's Austin-based Country & Western Swing band 'The Carper Family' recorded three albums together, toured extensively in U.S., Canada, and Europe, and were featured in 2013 on A Prairie Home Companion. 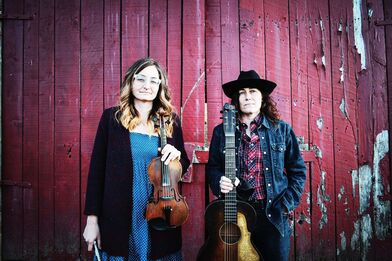 The Buffalo Gals
Rebecca Patek's album 'Come up and Meet Me', a collection of 10 original tunes and 2 instrumental covers, won Best Bluegrass album of 2017 with the Independent Music Awards.  Both Carper and Sundell played on this award winning album.  Joe moved from Texas back to Arkansas in 2014 and, soon to follow, Rebecca and Melissa moved to Arkansas in 2015, marking the reuniting of Sad Daddy in full force.  Sad Daddy recorded their 2nd album 'Fresh Catch' in 2016 and it was nominated for Best Americana album with the Independent Music Awards and Sundell's "Mountainside" won Best Bluegrass Song.

With a long and dedicated history of making their audiences happy, Sad Daddy is emerging anew with their album ‘Way Up in the Hills,’ with a release date set for January 2021.  With a more down home and old-timey feel than their previous albums, they all stretched themselves a bit to create a common theme and new songs together and are on a path to becoming a Band Band.  A band that writes together, makes breakfast together, fishes together, floats together, stays together. ​​​​